For the Fashion Show and Design Exhibition 2015 the students of the Graphic Design Department have been involved in the design process for the invitation on the main theme “Past Modern”. The design selected, which defined the whole exhibition style, is from Ms. Ami Kanno, in collaboration with Mr. Stephane Pagniez.

The 2015 Accademia Italiana Thailand Fashion Show’s theme is “Past Modern”, so I first started with the research about the keyword. The results showed styles that mix graphical elements from two eras; one from the past and another from the present. Before I even started the sketch, I had in my mind that I’ll create a design by using the “A” and “I” to give a highlight on the school’s logo icon.

My very first draft of the design was inspired by Art Deco’s geometrical pattern. I played around with the “A” and “I”, and added a modern taste by using only black & white and silver lines to give futuristic image. However, the goal was to keep it simple and clean, so the geometrical Art Deco design didn’t work well because it contained too many details. After the second research on hi-end fashion invitations, eventually got inspired by the Victor & Rolf’s sealing logo, I then decided to keep it clean and simple by reducing lines from the geometric design that already exist, and with the help from my partner Stephane Pagniez, we designed a silver  envelope with classical sealing to create the contrast between the past and modern. Therefore, the final look of the invitation turns out minimal, elegant, sophisticated, and futuristic yet classical. 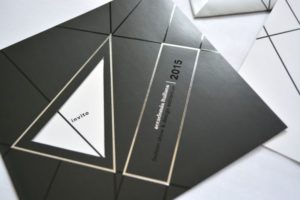 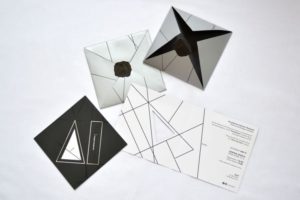 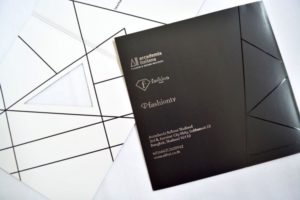